In the southern part of the village of Velp (Gelderland, The Netherlands) we find a beautiful old church from the 11th century called Old John church (Oude Jan kerk).

Now it is located between new houses, situated in a small park; but long time ago it was in the middle of meadows influenced by the river Ijssel (side branch of the river Rhine). 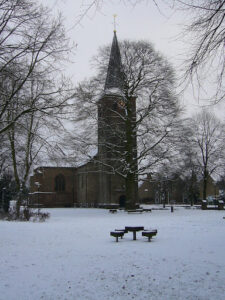 What is so special about this small (protestant) churh?

Very striking is the beautiful old mural, in 1949 edited by Jacobs Co.,  with the text of the Ten Commandments. Also three large stained-glass windows, made by Johan Mekkink, draw attention. Very special is the bell in the bell tower: in 1678 poured the famous bell-founder Peter Hemony from Amsterdam this bronze bell.

The  bell  survived  the  fire melts of the World War II, when many bronze bells  were converted into cannons and bullets. (Source:http://www.vriendenvandeoudejan.nl/folder.php)

When you walk around the church in winter, spring, summer or in fall, it is a nice atmosphere to recollect your thaughts from busy everyday life.