One might say the industrial city Chelyabinsk is lucky, it is surrounded by the numerous lakes and the forests, many of which became parks. The park named after Yuri Gagarin, first cosmonaut, is one of the most favorite parks of townspeople. The total area of park makes up 1200 hectare.  Practically there is no boundary between the city and the park; park is inalienable part of the city. 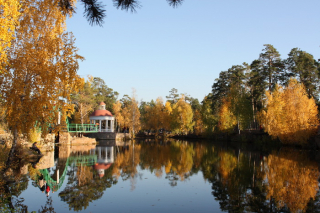 In the park there are many quarries. Once they were used to extract stones for buildings. The main stone is granite.Some quarries, until now, remain “wild”.  On the park paths you can see people on the bicycles, the rollers, and even on the horses, while on the narrow paths they prefer to walk on foot. In winter main entertainment is skiing. The dear place for the families to enjoy skiing are small hills called ‘’Monks’’.  From one side of the park  the Shershnevskoe water reservoir is located. In summer time townspeople bathe and become sunburnt here, in winter it is a favorite place for fishermen.  Many urban events are conducted on the territory of park. The Day of harvest  is a kind of Ecological festival. It is held in autumn, and everything which is represented on it, is grown by people living in Chelyabinsk.