In early July, garbage cars, filled with household waste of the Argayash town ( Chelyabinsk region, Russia)  lined up on Lenin Square in front of the administration of Argayash municipal district. In this way, workers of the public utilities have publicly demonstrated to the district administration that there is no place to take out a waste and recalled that the organization of a special area for domestic waste is the responsibility of the district authorities. 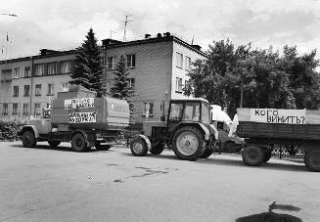 Since 70´s of the last century quarry has been used in Argayash , but now that quarry is in the place where the construction of new homes takes place.  Some houses have already fallen in the sanitary zone. Prosecutors of Argayash district required to take action to comply with environmental legislation. The file was transferred to the court.
Argayash turned out guilty without the guilt. Organization of garbage collection seemed to be debugged. And all these works, as it turned out, were in vain. Initially, during a protest it was planned to dump trash at the entrance of the building of district administration, but then the drivers felt pity for the Argayash central square.

– The problem with the garbage dump occurred long time ago, even before the intervention of the prosecutor’s office – told reporters during a protest  head of Argayash Viktor Nesterov. – We have already twice, in February and March 2009, appealed to the district administration on this issue. Prosecutor demands to ban the use of quarry. We are not against this, but where is authorized and licensed landfill? Imagine that the garbage will not be removed. What will happen? Argayash will sink under the garbage up to its roofs. By the way, the critical situation has developed not only in our area. Most of the villages dump waste on the not licensed landfills. I am speaking not only as head of Argayash, but also as chairman of the Association of rural municipalities and urban settlements in Chelyabinsk region. The problem must be solved, but district authorities are not willing to do what they should do.

The legitimate landfill has never been organized in the Argayash district. But people need a normal life in the settlement, with all its necessary components, including a landfill.